Make a stand (idiom) definition – Adopt a firm position about an issue. Hold firm, as in hold the ground against an enemy.

In 1858, Dudley Atkins Tyng was a 29-year-old Episcopalian pastor and abolitionist. Not everyone in his Philadelphia church agreed with his straightforward doctrinal preaching and position against slavery and he resigned to build a new congregation. At this same time, a powerful revival was sweeping through Philadelphia. The number of converts was so great that it was printed as a news item in papers across the country. One of the popular evangelists of this revival was Dudley Tyng. It was reported that over 5,000 men gathered at a noon mass at the downtown Y.M.C.A. That day, Tyng preached from Exodus 10:11 -“Go now ye that are men and serve the Lord.” Over 1,000 men responded to the gospel that day. 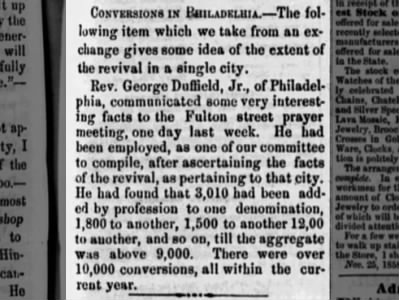 The following week, Tyng was visiting a farm and the loose sleeve of his shirt became entangled in the cogs of a corn thrasher, mangling his arm. The lacerations, nerve damage, blood loss, shock and infection were too much. Just a few days later, on his deathbed surrounded by family, friends and fellow ministers, Tyng whispered, “Let us all stand up for Jesus.”

Among those who heard those last words was Tyng’s good friend, George Duffield. Duffield was a Presbyterian minister, also serving a church in Philadelphia. Shortly after the death of his friend, Duffield was inspired by those dying words to write a 6-stanza poem. At the close of a sermon, he read the poem as a tribute to his friend. The sermon text that day was taken from Ephesians 6 which declares to “Put on the whole armor of God… Stand therefore, having your loins girt about with truth, and having on the breastplate of righteousness.”

The poem was printed, distributed and loved by people everywhere. It was set to the tune MORNING LIGHT by George J. Webb, but today the stirring tune is better known by the name WEBB. The words and music have been printed in hymnals since 1858, but typically only four stanzas are included. The hymn was very popular during the Civil War with both Union and Confederate troops.

George Duffield, Jr, D.D. served as the pastor of the Presbyterian Church in Galesburg, Illlnois, from 1865 to 1869.

Stand Up, Stand Up for Jesus

Stand up! Stand up for Jesus!
Ye soldiers of the Cross;
Lift high his royal banner,
It must not suffer loss.
From victory unto victory
His army he shall lead,
Till every foe is vanquished
And Christ is Lord indeed.

Stand up! Stand up for Jesus!
The trumpet call obey,
Forth to the mighty conflict
In this his glorious day.
Ye that are men now serve him
Against unnumbered foes:
Let courage rise with danger,
And strength to strength oppose.

Stand up! Stand up for Jesus!
Stand in his strength alone;
The arm of flesh will fail you
Ye dare not trust your own
Put on the Gospel armour,
Each piece put on with prayer;
Where duty calls or danger
Be never wanting there!

Stand up! Stand up for Jesus!
The strife will not be long;
This day the noise of battle,
The next the victor’s song.
To him that overcometh
A crown of life shall be;
He with the King of Glory
Shall reign eternally.